Up There Down Here

Fishin' On A River

Drunk On A Boat

Jake Owen premiered the new music video for his song, “Homemade” on YouTube today. The music video for “Homemade” shares the story of Owen’s grandparents and how they met in real life, capturing their love story, in a time period of the past. In an episode of his podcast “Good Company With Jake,” Owen discussed more about how his grandfather tracked his grandmother down, writing letters to her and how they are still together. Listen to the episode on “Good Company With Jake,” (HERE). View the full music video (HERE).

Jake Owen is releasing his highly-anticipated album GREETINGS FROM…JAKE today via Big Loud Records. GREETINGS FROM…JAKE has already garnered rave reviews from Billboard, Rolling Stone Country, The Tennessean and Sounds Like Nashville, for an impressive blend of traditional country twang and coastal-flare. To celebrate the release, the 7X chart-topping artist will perform his Top 10, ACM Award-nominated song “Down To The Honkytonk,” in the 9 a.m. hour of NBC’s TODAY on April 1 (check local listings). 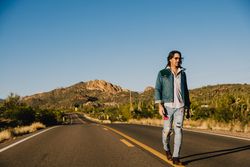 “May the simple things be amazing on the journeY of your life.”